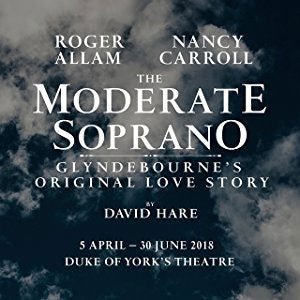 After an original run at the Hampstead Theatre in 2015, David Hare’s production, The Moderate Soprano, will transfer to the Duke of York’s Theatre for an 11-week season, starting on 5 April 2018.

The story about the founding of opera house Glyndebourne is told through the eyes of its founders, John Christie and Audrey Mildmay. Respectively played by Roger Allam and Nancy Carroll, who both originated the roles in 2015, director Jeremy Herrin also accompanies the transfer into the West End. Allam and Carroll are both Olivier Award winners and Herrin is the Artistic Director of Headlong Theatre Company, which in recent years has been behind West End productions including Common, Labour Of Love and People, Places & Things.

Designer Bob Crowley has also been announced to be part of the creative team, renowned for his Tony Award-winning theatrical designs, as well as a number of prolific operas including The Magic Flute with Nick Hytner for the English National Opera.