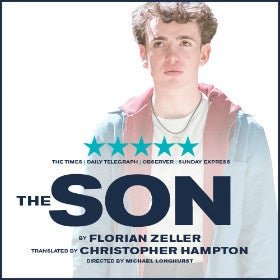 The Son marks the third play in a powerful family trilogy by Florian Zeller, and it's a very satisfying conclusion to the story, which also includes the two plays The Father and The Mother. All three have been beautifully translated by the multi-award-winning playwright and screenwriter Christopher Hampton, a theatre hero who was also responsible for the brilliant Tony Award-winning book and score for Sunset Boulevard as well as the screenplay for Dangerous Liaisons. The Son follows Nicolas, whose parents have divorced. He's going through a very rough time but the adults involved don't seem to notice, putting his odd behaviour – nicking off school, lying, hiding things – as normal teenaged angst.

Nicolas decides that moving in with his dad Pierre and his dad's new family might make him feel better, giving him the fresh start he needs. But it doesn't work out that way and poor Nicolas, lost for ideas to help himself, moves back in with his mum to see if that works. It doesn't, and the increasingly distressed boy ends up wondering what'll happen to him when all his options run out and he has to stop moving. With all this switching about to come to an end, what's left for Nicolas? The play's admirably directed by Michael Longhurst and stars Amanda Abbington and John Light as Nicolas' parents. If you like your theatre emotional, this one's for you!