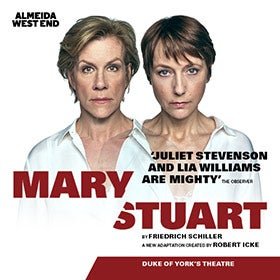 The Duke of York's theatre is the perfect venue for this latest production of Schiller's play Mary Stuart, a piece that depicts the final days in the life of Mary, Queen of Scots, the days that led to her execution. The play contains five acts, each broken into several scenes, and explores the two queens' rocky relationship. First performed in 1800 in Weimar, Germany, it inspired Donizetti's 1835 opera Maria Stuart and has seldom been off the stage, somewhere in the world, ever since it premièred. This is powerful stuff, a fictional meeting between the two queens that has fired the imagination of thriller-loving audiences for more than two hundred years.

The plot? Mary Stuart is imprisoned in England, allegedly for murdering her husband Darnley, but in reality because of her claim to the throne. Queen Elizabeth I, Mary's cousin, arranges a meeting that ends in anger and fury, thanks to Mary's unwillingness to submit to Elizabeth's wishes. The fictional Mortimer is planning to break Mary out of prison, but he is discovered and commits suicide. Elizabeth eventually signs Mary's death warrant, claiming it's because 'her people' want Mary to die. And the rest, as they say, is history. The brilliant Juliet Stevenson and Lia Williams play both roles, interchanging them depending on a toss of a coin before each performance. It's a classic!