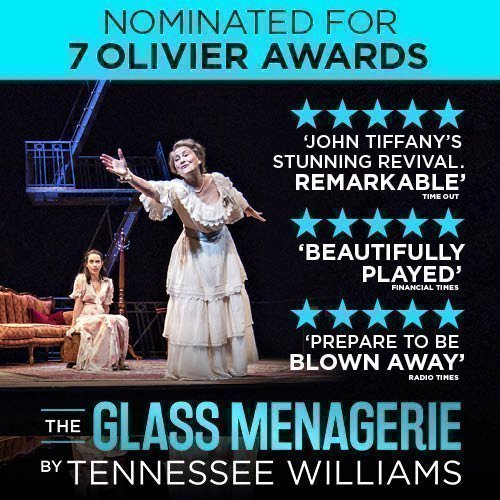 Before he wrote this play, US playwright Tennessee Williams was an unknown quantity. Once it hit the stage he was instantly shot to stardom. This exceptional revival of Williams' classic cut its teeth on Broadway and won a load of Tony nominations there before thrilling audiences in Edinburgh. Now it's in the West End, playing at the magnificent Duke of York's theatre from late January 2017. What's the story? Amanda Wingfield is determined to find a husband for her chronically shy and reserved daughter Laura, played by Kate O'Flynn. She enlists her son Tom to help find the perfect 'Gentleman Caller'.

John Tiffany directs, and the superb Tony Award-winning actress Cherry Jones plays the fading Southern Belle Amanda, Tony-nominated for her performance on Broadway. Michael Esper plays the reluctant Tom, who can't wait to leave home. And Brian J. Smith plays the role of the gentleman caller. This is what's called a 'memory play', a term coined by the playwright himself to describe a drama based on a character's memories. And it's potent, powerful stuff, as entertaining as it is heartbreaking. 1930s St. Louis bursts into vibrant life on stage as the plot unfolds and the long-awaited gentleman caller arrives. Will he make the family's dreams come true or destroy them?

Reviews Summary based on 29 reviews

Recommendations
Anyone:
Families:
Teenagers:
Young Couples:
Theatregoers:
A wow from th start
I brought a reluctant friend to see the show and she loved it. I enjoyed everything and the acting was superb. I am a big theatre fan and this is one of the best.
Arlene, 16 Feb 2017
Class Menagerie
Enthralling, captivating and moving. The production demonstrated care, grace and sensitivity in all areas with a formidable ingenuity to portray an original adaptation. Williams' well constructed words were utilised brilliantly and sharp moments of clever dream like movement left the auditorium transgressed in a world cultivating deeper meaning and feeling than could otherwise be possible in more straight laced versions.
Thomas, 15 Feb 2017
Great theatre
Very perceptive ,strong characters-Cherry Jones (Amanda) marvellous. db
David, 10 Feb 2017