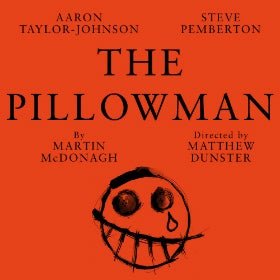 Katurian the writer has written some very odd stories, so odd they see him snatched by the police and taken in for interrogation. Is he the one who killed the children? It looks that way, since his stories and the children's deaths are so similar. Or is Katurian's strange brother Michal somehow responsible? You'll love this extraordinary and highly unusual black comedy with its hints of time travel and deep suffering. Best of all it stars a couple of superb British stars of screen and stage. Aaron Taylor-Johnson has thrilled us with wonderful performances in Kick-Ass, Avengers: Age of Ultron, Nowhere Boy, Godzilla and more. He plays the author Katurian. Steve Pemberton, creator of much weirdness including Inside No. 9 and The League of Gentlemen, plays the policeman Tupolski.

This brilliant piece of entertainment is written by Martin McDonagh, the respected Irish-British playwright, screenwriter, producer, and director who is widely acclaimed as one of the greatest living Irish playwrights. He created the gorgeous film Three Billboards Outside Ebbing, Missouri, as well as the excellent The Aran Islands trilogy, which includes The Cripple of Inishmaan, the play that won Daniel Radcliffe a Best Actor in a Play award from WhatsOnStage. Impeccable credentials, a powerful story, and a proper treat for grown-ups awaits you.