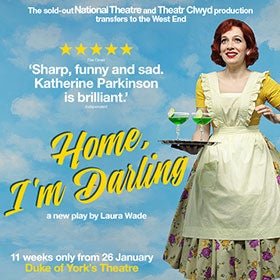 You're offered redundancy at work, so you leave your job in financial services. Rather than get a new job and rejoin the rat race, you decide to stay home and become the perfect housewife, 1950s style. It's an easy enough transition since Judy and her best friend Fran are big fans of vintage fashion, vintage furniture, vintage everything. They even attend the annual Jivefest festival of 1950s dance. For Fran, all this retro stuff is a fun hobby. Her husband feels the same. But Judy and Johnny get completely tied up in their fantasy, Judy in particular, and while they look like one of those annoyingly perfect couples from the outside, things are far from OK under the surface.

When they start to run out of money, Johnny gets restless and considers having an affair with his young female boss, even though she has passed him over for promotion. The vile Marcus, Fran's husband, exploits Judy's situation with some 'inappropriate physical contact'. And it isn't long before the beautiful retro world they've created for themselves transforms itself from a utopia into a prison. The IT Crowd's Katherine Parkinson, who also scored a big hit with TV's series Humans, is at her hilarious best, and it's on in the West End for a limited 11 week run. Don't miss it!